Once the verdant joy of Spring ends, the vibrant and boisterous Summer blossoms.

Welcome again to another guide into the Feywild, today we’re going to cover the most iconic court of the Seelie faerie, the Summer Court of Titania. Whenever you speak or mention the Seelie fey or the Seelie court, you will undoubtedly think of the Summer Court and its fair queen, Titania. To give you some background on the Summer Queen, you need only start with William Shakespeare’s Midsummer Night’s Dream. Within the pages of the play, you learn of the whimsical natures of the fey, along with Titania taking on consorts from time to time, and the fey having adventures and parties between the dusk and dawn. In fact, it’s often referenced that dreams can be interpreted as a mortal being spirited away to the realm of the fairy folk. Another good media example would be Hayao Miyazaki’s Spirited Away or Ferngully. You can also use memorable stories about traveling to fey-like words like Alice in Wonderland.

You can read my other articles here:
Spring Court | Autumn Court | Winter Court | Courtless, Other Courts, & the Feydark | Realms of the Feywild | Roleplaying Fey & Archfey

As I’ve stated before, my guide borrows many bits from the 5th Edition D&D ruleset but also uses lore and information from a multitude of sources. My guides assume there four distinct courts for the four seasons, while the current D&D lore has it set to two, the Summer Court and the Gloaming Court. The information here will hopefully help give you ideas and suggestions when handling with the adventures in the verdant woods of Summer.

The Summer Woods, or the Emerald Forest, generally are the regions governed by the Summer Court. An endless forest of tall verdant trees with pockets of groves, springs, and streams. The grass on the forest floor can vary in density and height but often remains within a reasonable size compared to medium sized humanoids. The trees are a different matter, many are a couple hundred feet tall with the oldest ones being possibly three to four hundred feet tall. The fauna and local animals are a wide range, there are numerous varieties of fey as well. Many denizens either live deep beneath the earth, inside the trees or roam freely across the endless forest.

Most literature, folklore, and pop-culture interpretations of faerie depict Titania as the actual leader of the Seelie Fey, she often rules the Summer Court. In older planar supplements where the Feywild did not exist, the Seelie Fey governed many portions of the outer planes of the Besatlands, Ysgard, and Arborea. Using the current lore, you can still infer that there are fey crossings from the Feywild into these planar realms.

Most fey in the Summer Court will carry some sort of motif with them since the Summer court generally represents vibrant life and strength. You might find the fey here more warlike or tribal. Many beasts and beast-like fey will tend to be larger than their mortal coil cousins. Some may be covered in gold or emerald leaves, their coloring may also be extremely colorful and prismatic. Summer Court fey might be prone to anger or have short tempers, you will find plenty of strong predators as well. Even Queen Titania has been known to be extremely vengeful, almost as badly as the Queen of Air and Darkness from the Gloaming/Winter Court. The Summer Court is elementally aligned to fire with the Winter court typically aligned to air. If you want adjectives for the Summer Court, imagine all the sort of connotations that come with the symbolism of fire: noble, renewal, warmth, bright, brilliant, relentless, indiscriminate, wrath, strong, aggressive, and industrious. You can also expect many summer fey to be arrogant and stoic.

The Summer Court is elementally aligned to fire with the Winter court typically aligned to air. If you want adjectives for the Summer Court, imagine all the sort of connotations that come with the symbolism of fire: noble, renewal, warmth, bright, brilliant, relentless, indiscriminate, wrath, strong, aggressive, and industrious. You can also expect many summer fey to be arrogant and stoic.

It’s important to understand that while D&D likes to attribute the Seelie court faeries as good-aligned, they can be good but that does make them any less dangerous.

In most of the D&D lore, they typically do not separate the fey between the four seasons and instead separate them by the simpler dichotomy of good (Seelie) and evil (Unseelie) courts. But if a DM wanted four courts, they would need to make distinctions to separate the respective seasons, the locales in the Feywild can be easily amended, but the harder task is filling such a world with entities to best represent the Summer season and its court. Luckily, the Summer court is often the “home” for the Seelie Court in general. So any literature that just refers to the Seelie court can be considered fair game for the Summer court.

Some important Fey entities/deities in the Summer court:

When thinking of fey from the Summer court, think of tree-like entities. There are plenty of dryads and nymphs that guard a grove within the Summer court, most of these tend to have golden features to represent the endless sunlight that shines through the Emerald Forest. You can find dozens of elemental spirits that roam through the Summer Woods, anything from fire sprites to sylphs. Remember that the Summer Equinox is the highest point of power for the Summer court, entities like Titania are not be trifled with during this period. While many of the Summer faerie folk are well intentioned, they ultimately have their own ulterior agenda and will stretch the truth to fit their motives. One observation is to consider the Summer fey as the kind of entities that would stab you in the back but with a smile and warm food at the same time.

Note: Something to keep in mind, while the current D&D lore sets a good/evil axis with the fey courts, understand that the fey does not share common viewpoints on morality like those in the Material Plane. Good & evil is subjective, you can easily have evil fey in the Spring/Summer Court if you so want. Like a deadly fey that lures their victims by being beautiful only to be an elaborate trap. Summer faeries can often be vindictive and prone to anger.

You can find similar advice, topics, and much more in our “Journey into the Feywild” supplement. Now available on the DMs Guild. 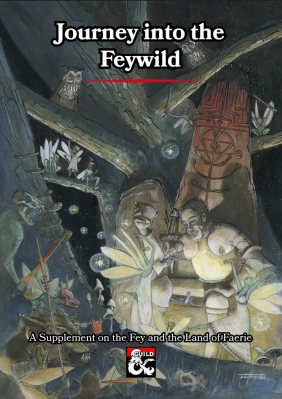