Back in during my days of playing Dungeons & Dragons 3.5 Edition, there was a lot of different base classes available to satisfy a plethora of game styles and flavor. One of them that always caught my eye was the Factotum, which was featured in the Dungeonscape supplement. The supplement itself wasn’t memorable, in fact, it mostly dealt with tips and advice (along with tables) for DMs to create intricate dungeon crawls. But the Factotum was a standout, conceived as a real jack-of-all-trades class than even the humble bard. Sometime back in 2017, I wanted to bring back this class into the modern design philosophy of 5th Edition. But how? It took some thoughts, drafts, and even me forgetting about it for half a year for that spark of genius to arrive. I spent some time writing the initial draft, doing my best to not just create a carbon copy of the original forced to fit within the constraints of the new ruleset but instead, make it unique on its own while paying proper homage to all that it represented: creativity.

This article is to serve as both a developer’s journal, as well as a sneak peek into what became the current iteration of the Factotum class.

During my undergrad years as a psychology major, I wrote a meta-analysis on the testing Creative Intelligence. Surprisingly, everything that came from that paper sort of became the anecdote for the Factotum. In 3.5e, the Factotum’s features and abilities were bound by this resource called Inspiration. Unfortunately, the term is already a game mechanic within 5th edition, which required a new identity and name to flavorfully encapsulate the Factotum’s creative spark. Hence why the crucial primary resource and feature of the Factotum was so eloquently termed: Genius.

Genius is a new resource for the Factotum, which a character can only possess a certain amount of sparks of Genius before needing to rest. When a character expends a Genius, they can apply their Intelligence modifier to an ability check or saving throw they’re not proficient. If the Factotum chooses an ability check or saving throw they are proficient, then they instead can spend a Genius to double the proficiency bonus for that particular check or save. This benefit lasts until the start of their next turn.

The idea was to represent the fleeting moments of Genius, where it does not last, and the creativity has to be utilized before its lost.

It’s mechanically similar to Bardic Inspiration but with several caveats. Firstly, there are no dice rolls (making Intelligence matter more), and the effects are a substantial boon that lasts for a short period of time. Secondly, Genius inherently is designed to only benefit only the Factotum, because of that, there was no real design reason to have a delayed triggered effect like the Bard.

As the Factotum levels up, the character will learn new and resourceful ways to utilize their Genius to do dazzling effects and perform stunning feats. Some noteworthy features include improvising magical abilities. For example, the Factotum at 9th-level acquires the Mystical Dilettante ability, which allows the character to improvise features such as Turning Undead, even lower level Wizard spells, or also producing healing poultices. A combination of two original features from the 3rd edition iteration but redesigned as one convenient bundle.

Just a dalliance and nothing more

Sometimes when you’re creating new subclass archetypes, you either stick to the original term, or you become clever with your subclass name choices like the Bard’s various colleges or the Wizard’s arcane traditions. Since most factotums are generalists or at the very least, individuals who acquire every skill they learn, I thought it would appropriate for their focused areas of interest was nothing more but a mere dalliance. Just something they were uniquely curious about and decided to pursue.

I present four subclasses (or dalliances) for the Factotum with this write-up. We have another familiar D&D 3.5e reimagination in the Chameleon, based on the original class from Races of Destiny, which allows a Factotum to indeed mimic all of the other classes in the game in some capacity. The Exemplar is a skills guru that leaves other amateurs in awe. The Martial Ace has developed their own fighting style using their ad-hoc approach to weapons training. The Thaumaturge is a spellcasting dabbler that knows a few spells, can occasionally read or speak dead languages and can handle any magical item if needed.

What to learn more or purchase the Factotum?

Look no further, the Factotum is available for download on the DMsGuild. Please go check it out and leave any feedback. 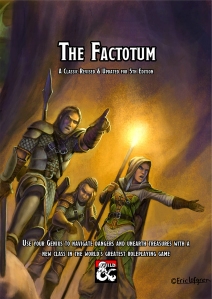 Thank you to my patrons on Patreon for funding this endeavor. Patrons have early access to all releases.